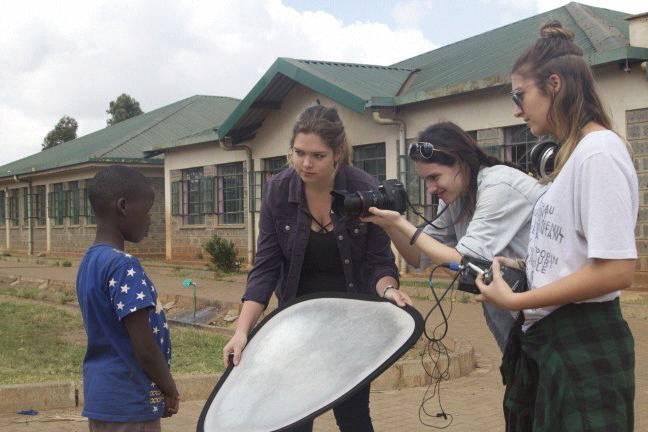 By Hayley Graham, Undergraduate student at the RTA School of Media, Faculty of Communication and Design

I’ve always loved storytelling, whether it be listening to a story or telling one. So, when the opportunity to take the RTA International Development course to work on a storytelling project for Amref Health Africa came about, I couldn’t let it pass me by.

Along with 6 of my fellow classmates and our professor, Lori Beckstead, I travelled to Kenya for 2 weeks in February 2017 to film two projects.

During the first week, we travelled outside of Nairobi to Magadi to film a documentary about Amref’s project, Alternative Rites of Passage on the topic of female genital mutilation (FGM), also known as female genital circumcision.

For the second week, we travelled back to Nairobi to film a social media campaign on Amref’s Dagoretti Child in Need Project.

For the campaign, we filmed 30-second videos highlighting a child at the centre and the subject they are most passionate about. We had little teams of three filming, so the team I was in filmed a handful, but the video that became my baby, for a lack of a better term, was Sophia’s “I am an actor.”

For every video we wanted to find a child who could not only highlight a particular school subject, but also who represented what the Dagoretti Child in Need Project stood for.

For acting we chose Sophia, and she was great. She was the most hardworking child in the class, and took it very seriously. We spent half a day filming and interviewing her. When we got back to Toronto, it was our responsibility to edit the footage down to a 30-second video, and deliver a product that we were all proud of.

See #DiscoverDagoretti: RTA Community Engagement in Kenya (Part 2 of 3) and (Part 3 of 3) for more on this project!